Scraps from the Past: 1950s Girl's Shirtwaist Dress in Brown Taffeta

The Pattern: McCall's 4016 from 1957 provides this cute and classic summer shirtwaist dress for a growing girl. 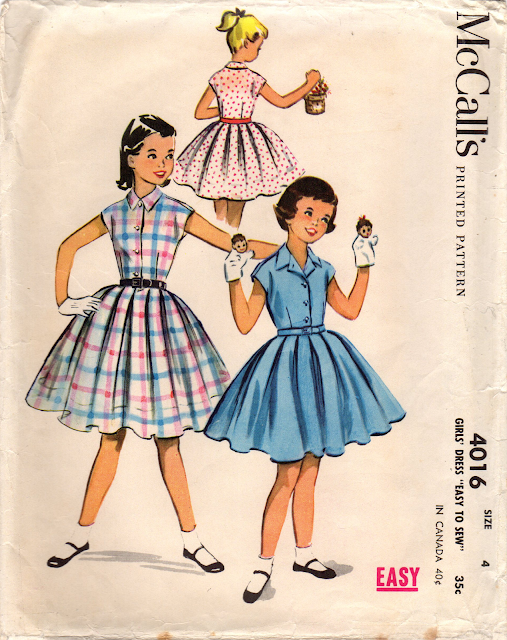 The Scrap: Scraps of shiny taffeta in a warm brown were tucked inside the envelope of this pattern. Can you visualize this dress in this fabric? It would be a party dress for sure! 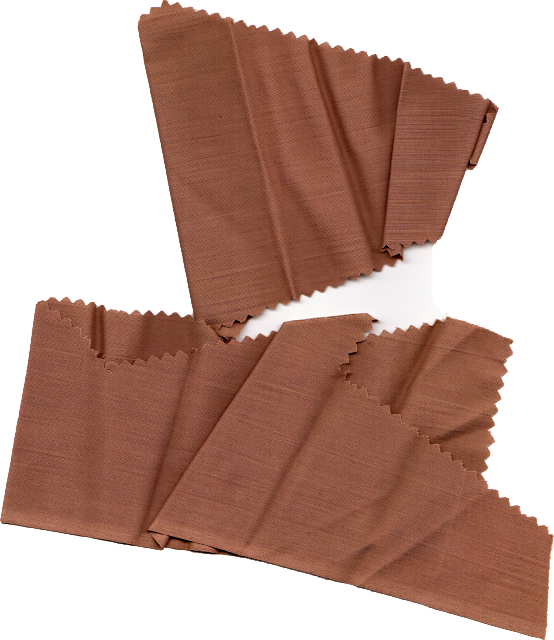 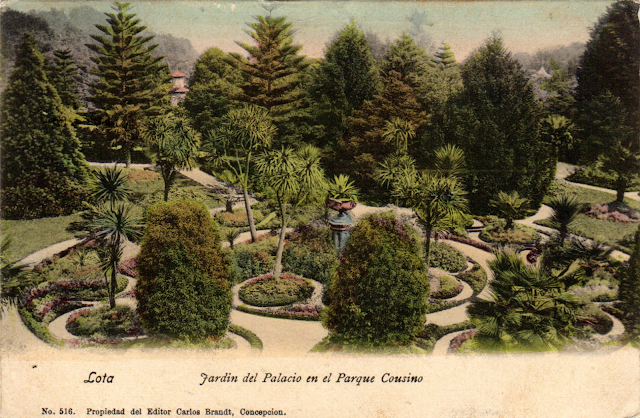 This beautiful, and dare I say it, rare postcard from the country of Chile in South America (probably worth a few dollars!) provides an image of the Jardin del Palacio en el Parque Cousino - the Palace Garden in the Isidora Cousiño Park. The park is also called Lota Park (Lota de Parque) because it is located in the port city of Lota, Chile, overlooking the bay. It was designed between 1862 and 1872 and includes trees, gardens, statues, and pools. Guides dress in the style of the 19th century and recall the time period of Isidora and Luis Cousiño, who oversaw much of its development. The park also includes a zoo, a meteorological observatory and a conservatory with tropical plants. It contains the tomb of Carlos Cousiño, the son of Isidora and Luis. Carlos also worked on the development of the park, and was alive at the time of this postcard. The "Cousiño Palace", home of Isadora and Luis, and the "Palacio" referenced in the postcard, was located within the park. Though the home itself was demolished in the 1960s, the adjacent gardens remain.

The view in the postcard is of the central part of the park where the palace once stood. Below is a current image from the park. 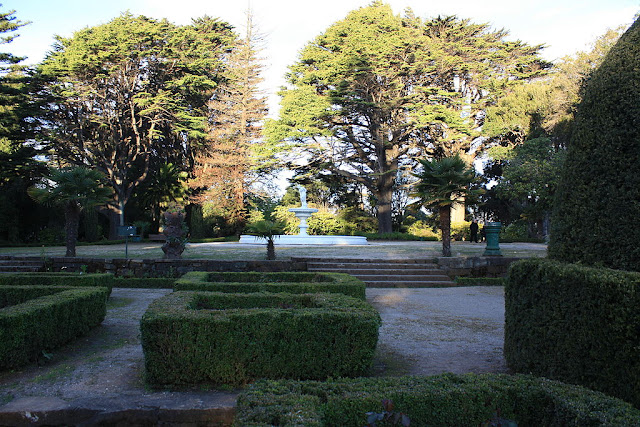 Dear friend,
Am far away
and still going
farther, we never
stop to think any
more.
Jerome C. Huff 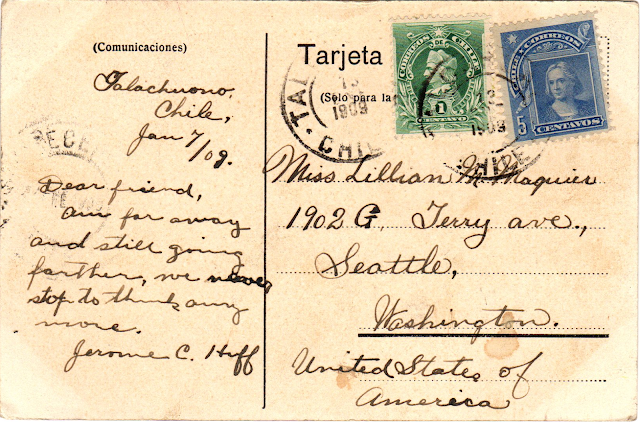 This postcard from Lillian's collection is one of my favorites. It is special because it comes from a friend who is traveling in a foreign country. Chile was not a common destination for travel in those days. It is also special for the writer's beautiful penmanship. But most especially it is a treasure because of its simple yet poignant message. It almost reads like a Haiku or poem. It is such a thoughtful, pensive message. It speaks of loneliness, and reflection on decisions in life. Perhaps he is just homesick, or perhaps lonely. We will never know.  But his message still speaks to the heart after more than a century.

I was watching Downton Abbey last night (oh my gosh - don't you just love the costumes for Edith and Mary?!) It makes me want to sew up a whole wardrobe of 1920s frocks. It is hard to believe there is only one episode left. :( At least we still have Miss Fisher of Miss Fisher's Murder Mysteries to get our Flapper Era fix.

To help you with your Downton Abbey or Miss Fisher's Murder Mysteries frock envy, just turn to Ruth Wyeth Spears and her wonderful tips from the 1920s. In this tip for the home sewist, she covers the latest frock style from Paris with her usual simplicity. This frock, with a  unique neckline with offset jabot collar, and artful cascading drape below the waist, is designed for print fabric. Inspired? 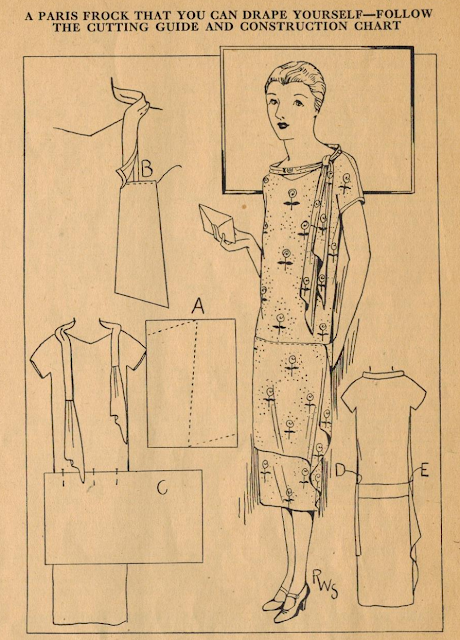 Posted by Kathleen at 3:30 PM No comments:

In Search of Style: 1950s Afternoon Dress for Campus, Office, and Home!

The clipping:  The clipping below was tucked into the pattern Woman's Day 5042, and what fun to actually see how Woman's Day magazine advertised their patterns! When working with mail order patterns, one often wonders what the original advertisement looked like. Most mail order patterns were advertised in newspapers, but there were several that advertised in magazines, typically the magazine's own brand. This was true of Woman's Day patterns in the 1950s. This clipping provides a wonderful color version of the pattern. Compare it with the pattern image that follows. 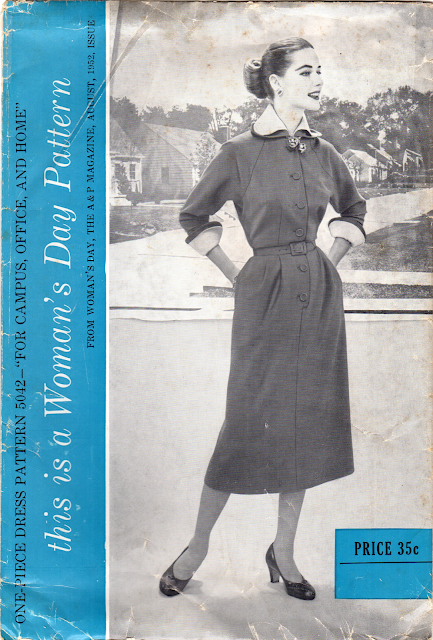 As you can read on the pattern envelope, this pattern was published in the August 1952 edition of Woman's Day Magazine. This crisp and contoured dress "for campus, office, and home" definitely looks all business. Note that it is a step-in dress, and has an eye-catching contoured double collar and ditto for the cuffs. Another clever aspect to this dress is that each sleeve is one piece (single seam), with the back being "kimono" style, while the front takes on a raglan aspect. Clever design!

And just for the fun of it, here is the back side of the clipping, full of fabric swatches in rich blue tones.

Scraps from the Past: Playwear in Stripes

Now is the time we start thinking seriously of summer and great vintage summer fashion. This pattern is the perfect ensemble for a summer day of outdoor play - a picnic, a day in the park or at the beach. The skirt wraps around the step-in playsuit - it's great 40s style! 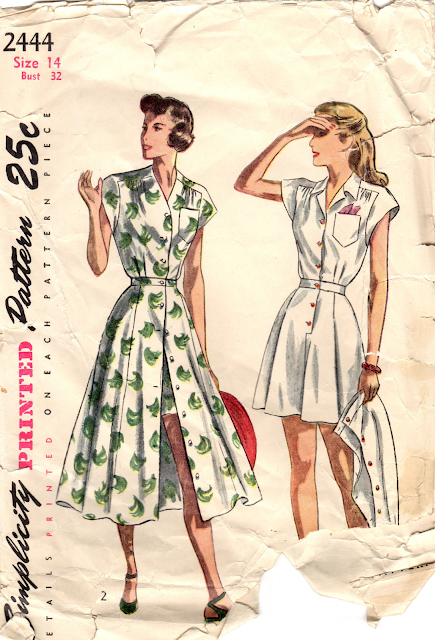 The scrap: This red-and-white striped piece of fabric was the collar piece, and was tucked in the pattern envelope. This piece of soft cotton looks like it would make a fresh and comfortable ensemble for summer sport and play. Although can you picture the entire outfit in red-and-white stripes? Perhaps this was a contrast fabric piece?

Before and After: Adorable Toddler Dress & Bolero for Valentine's Day

Not too long ago I included a charming toddler dress & bolero pattern in a "Scraps from the Past" post, and now it returns as a "Before and After". Some patterns are just that good! I sold the pattern to an amazing customer who quickly whipped up an adorable ensemble for her toddler daughter. Here are the results. 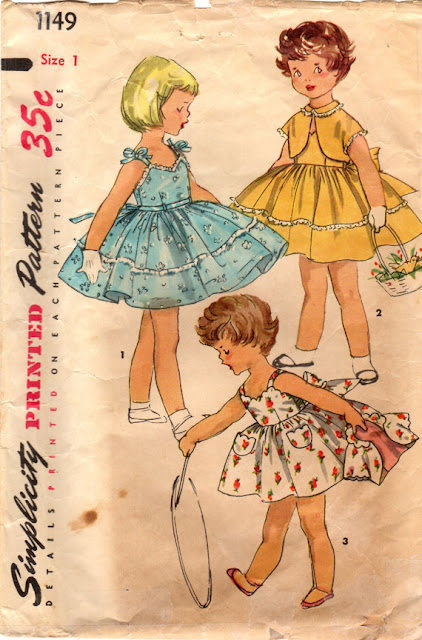 The results: It's divine, it's sublime! It's a little dress and bolero, befrilled, beribboned, and perfect for Valentine's Day! The sewist, Beth, made the dress for her daughter, who is the model in all these pictures. Note the lace trim and the addition of the heart shaped pockets on both the dress and bolero. Her accessories (hair bow, marvelous red shoes, and lace-trimmed socks) complete the ensemble perfectly. 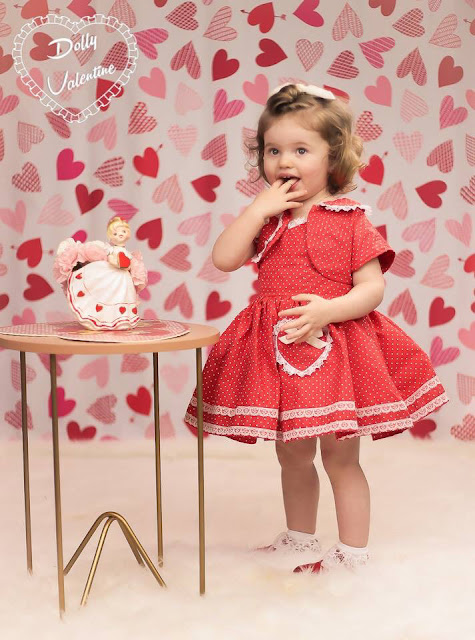 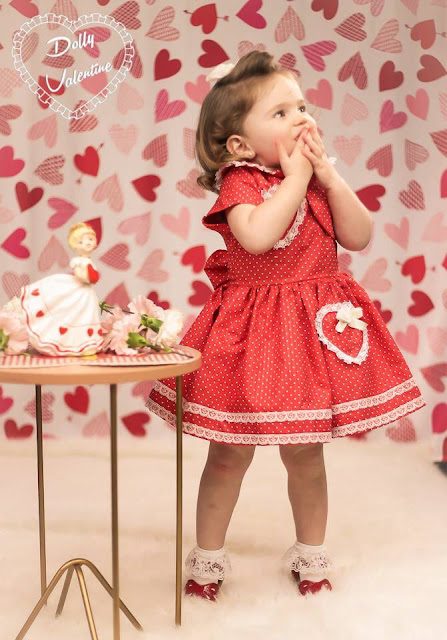 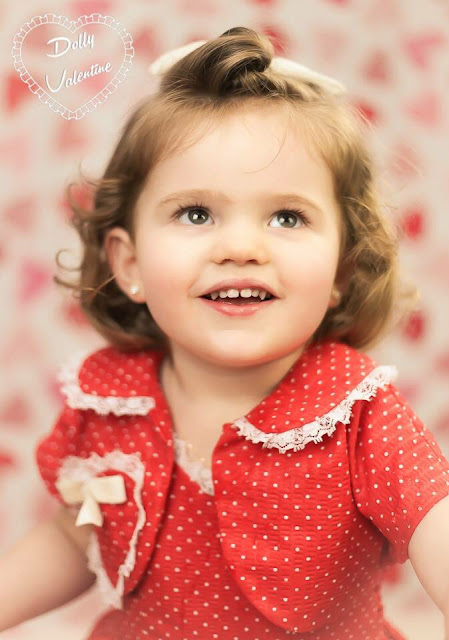 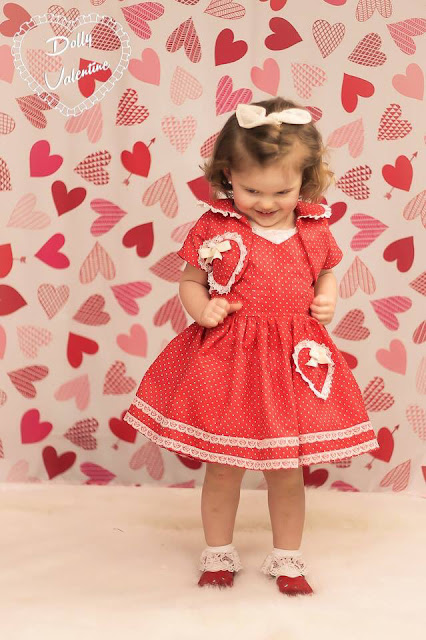 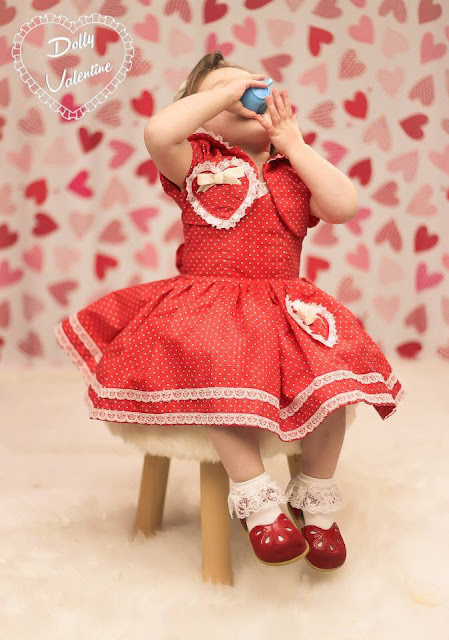 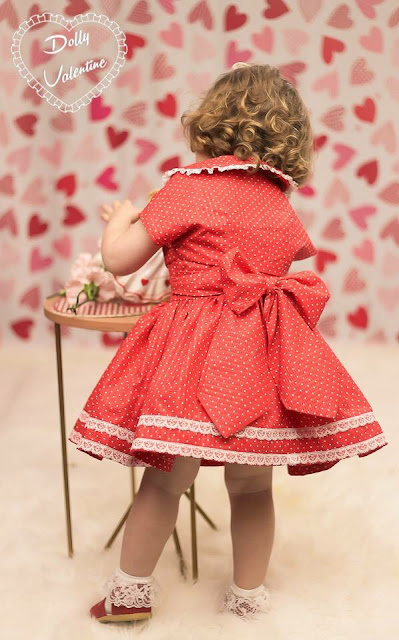 
You are in for a treat! And thanks to Beth for sharing her pictures!
Posted by Kathleen at 10:49 PM No comments:

Here we are in the last season of Downton Abbey and I am been very remiss in posting more of Ruth Wyeth Spear's wonderful tips from the 1920s for the home sewist! To remedy the situation, here is a wonderful post for making a pair of beaded shoe accents, which Ruth states that you can make "quite easily and very economically"! Do you have "some cut steel beads, a scrap of buckram, a half yard of fine hat wire, and a bit of black satin"? Then make a pair for yourself to wear with your vintage 1920s dresses. And then make another pair as a gift! :) 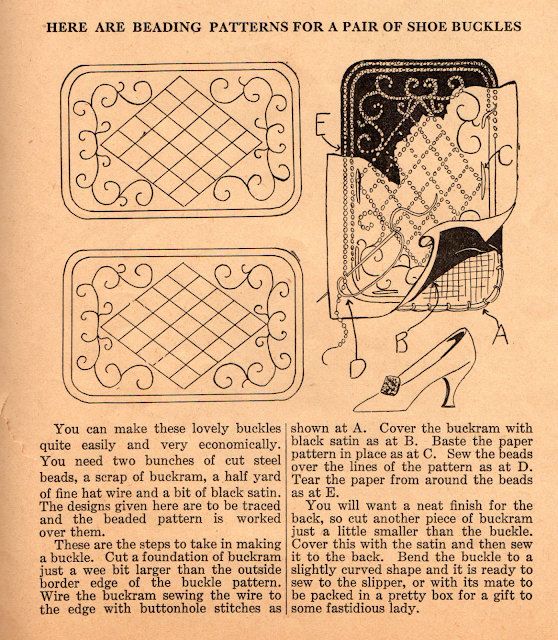