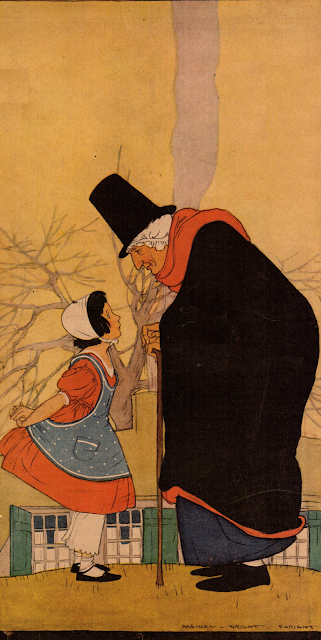 I just listed in my shop this pattern (Butterick 4720) for a fabulous party frock from 1932. The frock features eye-catching asymmetry in bodice and skirt, wonderful and equally eye-catching sleeves, and is topped with a short fur-banded cape. Positively inspiring!

Written on the pattern is this remark: "Wedding dress pattern Nov. 18 1932". What a spectacular wedding dress this would make. Totally gorgeous. 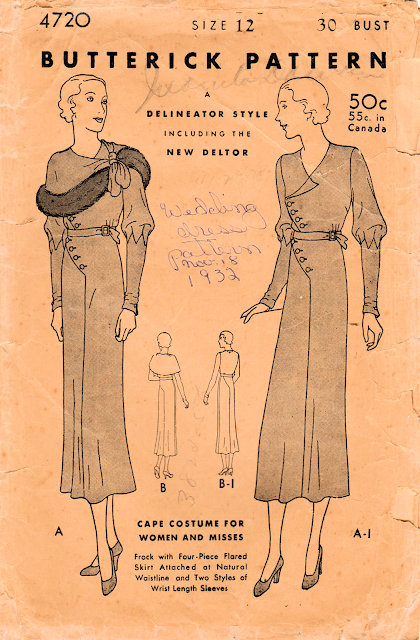 Posted by Kathleen at 2:16 PM No comments: 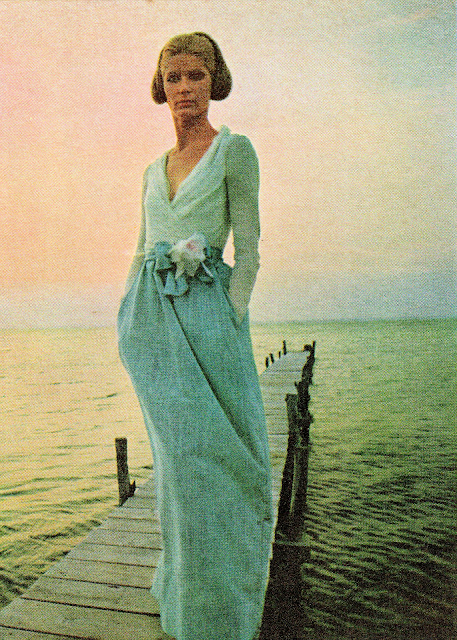 Featured in McCall's magazine, December 1965.
Posted by Kathleen at 3:19 PM No comments:

Home Sewing Tips from the 1920s: Make a Yoke and Add a Dress To It!

In this tip from Ruth Wyeth Spears, she tells her 1920s home sewists that dresses as sketched here "are new in the Parisian mode". And who wouldn't want the latest dress styles from Paris? This tip illustrates just how easy it is to sew a very fashionable 1920s frock. Happy sewing! Let me know if you sew a dress using this tip!
Posted by Kathleen at 10:36 AM 4 comments:

These smart frocks from 1936 were featured in McCall's magazine, and each has stylish details that make them highly desirable! 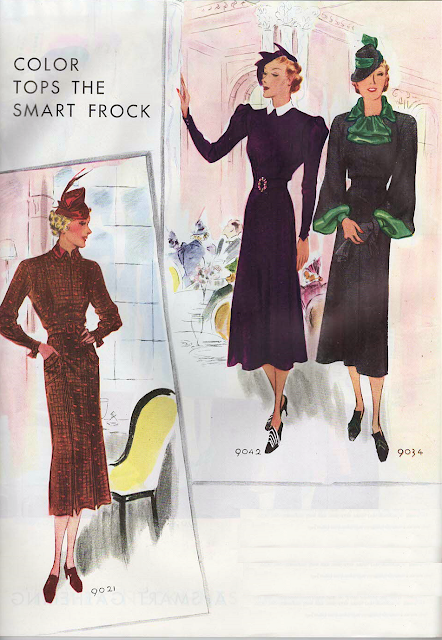 Dress 9021 on the left is sewn in angora wool jersey and sports top-stitched seams (both bodice and skirt) that release into inverted pleats in the skirt. It has double collars, the upper one of velveteen.

Dress 9042 in the middle is a deep grape-purple, with contoured seams at the midriff (difficult to see because of the dark color).

Dress 9034 on the right is a black frock with dramatic sleeves and collar, and is trimmed with velvet. Yummmm!
Posted by Kathleen at 9:34 AM 1 comment: 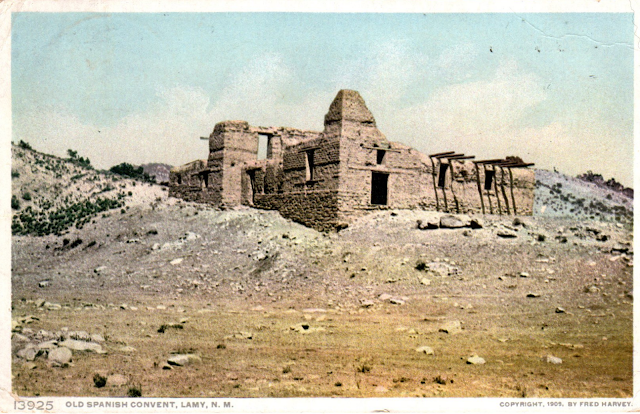 The text for this postcard states "The town of Lamy, between Las Vegas and Albuquerque, was named for the good Archbishop who founded nearby a convent, the wall of which are still standing, and who also once taught the Indians in a little adobe school house. At the time of the founding of this convent he was a missionary priest, but afterwards became Archbishop Lamy of Santa Fe."

I could find no record of this structure on the internet, and Lamy is a tiny town of about 200 people, mostly a train station stop. 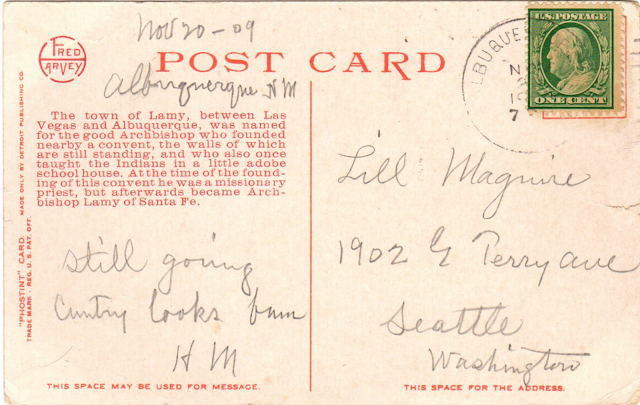 This brief postcard from Lillian's father is so very interesting. He is traveling from St Louis, Missouri to California. Clearly this stop in New Mexico did not impress him. "Bum" he called the countryside! New Mexico is surely much drier than Missouri, so I suppose we cannot fault him for his perception. But New Mexico is an amazing state with much beauty.

In 1909, the fastest way to get from St Louis to the west coast would be train, a long trip of several days. We do not know the reason Henry Maguire is traveling, but at least he found time to drop a short postcard to his daughter at this stage in his journey. He must have written this in a hurry, for the penmanship is not neat or tidy, and seems hurried.

It is rather fun to see how direct and to the point Lillian's father is. I look forward to his next postcard!

Enjoy this serenely lovely gown in wood-rose moiré from 1965. The gown falls from the shoulders in a Watteau train. 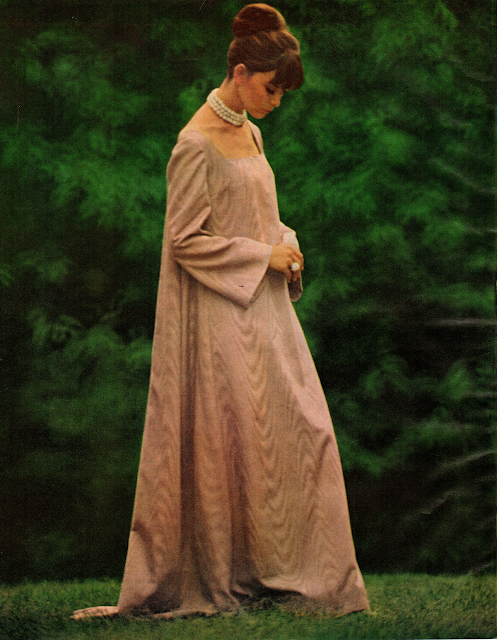 Featured in McCall's magazine, December 1965
Posted by Kathleen at 8:41 PM No comments:

Scraps from the Past: 1940s Toddler Dress 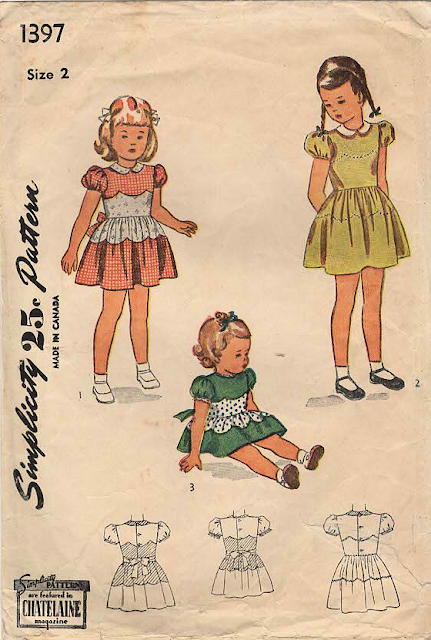 The scrap: Tucked into the pattern envelope for this cute toddler dress was a small soft cotton fabric scrap: stripes of pink and soft teal or aqua blue contrasting with gray. There is no contrasting fabric scrap, so it is hard to know if view 2 was sewn rather than views 1 or 3. If a contrasting fabric were used, would the striped fabric be used for the midriff and upper skirt? Or for the upper bodice and lower skirt? Tough decision!

Email ThisBlogThis!Share to TwitterShare to FacebookShare to Pinterest
Labels: cotton fabric, Scraps from the Past, simplicity 1397, toddler dress

Home Sewing Tips from the 1920s: A Fresh Taffeta Flower for Your Shoulder

Here is another lovely corsage from Ruth Wyeth Spears and the 1920s. This one features fringed petals of taffeta. As Ruth says, "Flowers like this are so easy to make that you can easily have a fresh one whenever you want it." 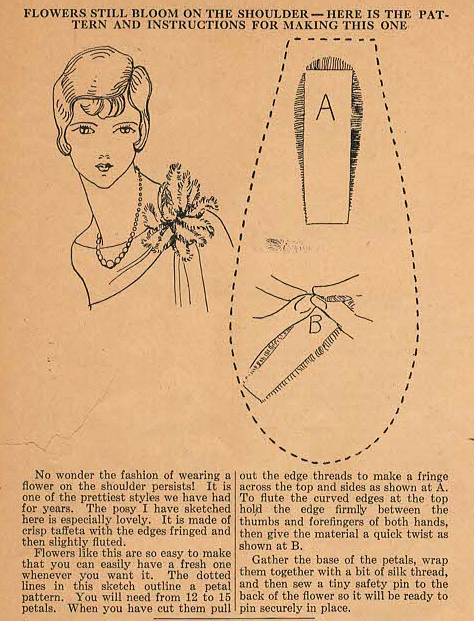 Create several, one for every outfit, for every season!
Posted by Kathleen at 10:55 AM 3 comments:

Jaunty 1930s Dresses with Back Fullness

These dresses from the December 1936 McCall's magazine look thoroughly jaunty. From the front, the bodice, waistline, and hip fit smoothly. But in back, the skirt flaunts its fullness. Who wouldn't love to have one of these back-flared frocks? 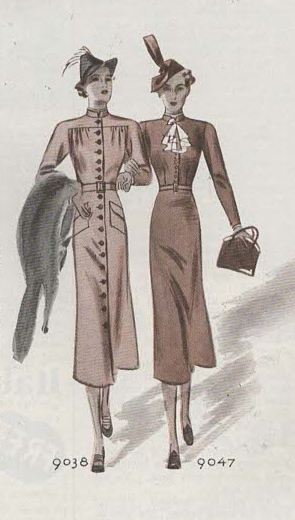 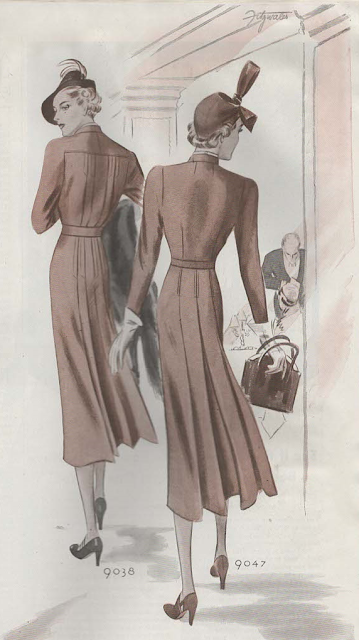 Scraps from the Past: 70s Designer Sundress

The pattern: Vogue 1638, a flowing sundress or evening gown from 1977 and Diane Von Furstenberg. 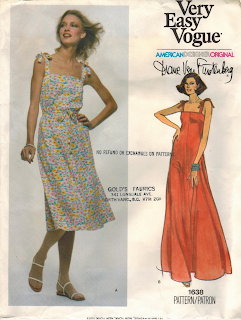 The scrap: This piece of charming cotton floral print was left in the envelope, giving the hint that the original sewist took her inspiration from the pattern photo, and sewed the sundress version on the left. 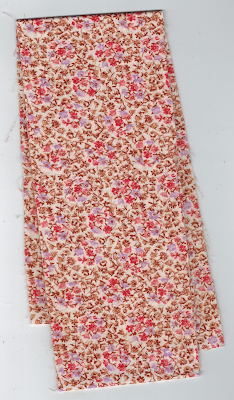 Posted by Kathleen at 6:07 PM No comments:

Home Sewing Tips from the 1920s: A Smart Little Hat of Silk and Straw

Need a new hat? Want to try something that requires some serious millinery supplies? Then use this tip from Ruth Wyeth Spears and the 1920s to create your own "smart little hat" of silk and straw. 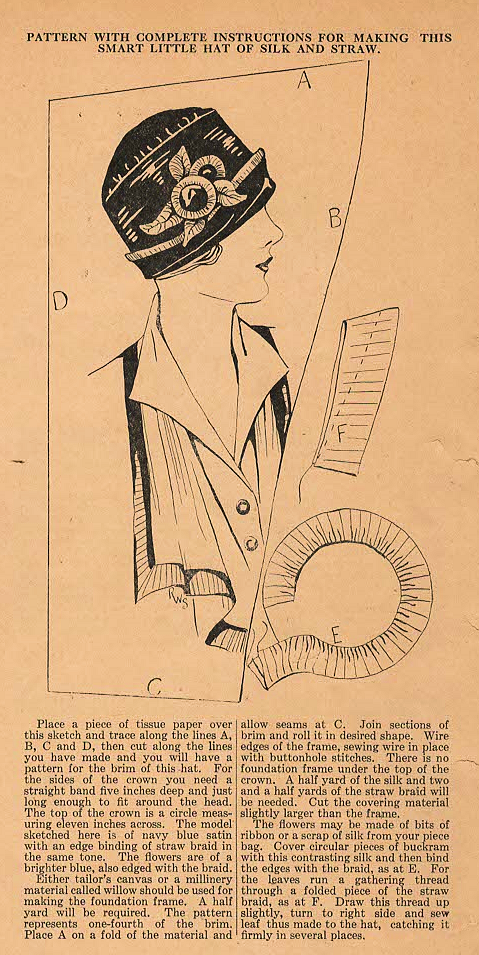 This pattern requires the following material:
I do believe that the extra effort required by this pattern will result in a very stylish cloche!
Posted by Kathleen at 6:35 PM 1 comment:

How is your sewing room (or closet) organized? If you love to sew using vintage patterns, perhaps you might also want to organize your sewing room with vintage accessories. I have two patterns currently in my shop that will allow you to do just that.  Simply pick your decade! 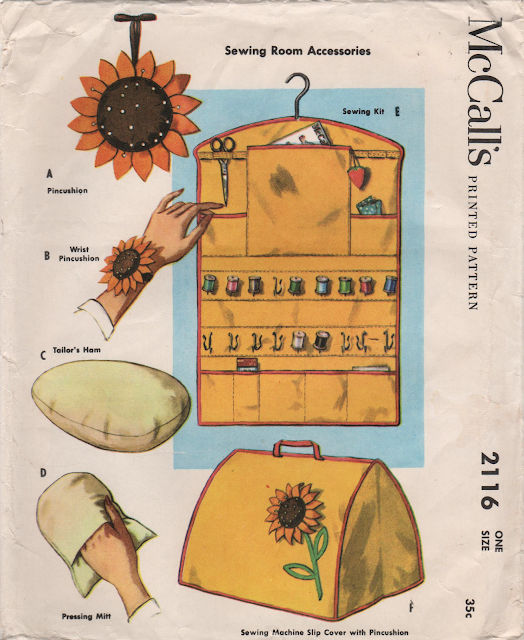 This great collection from 1953 includes a wall pincushion, a wrist pincushion, a tailor's ham, a pressing mitt, a sewing kit that holds thread, notions, and tools, and a sewing machine cover with a sunflower that snaps on. And of course, the theme is sunflowers. :) 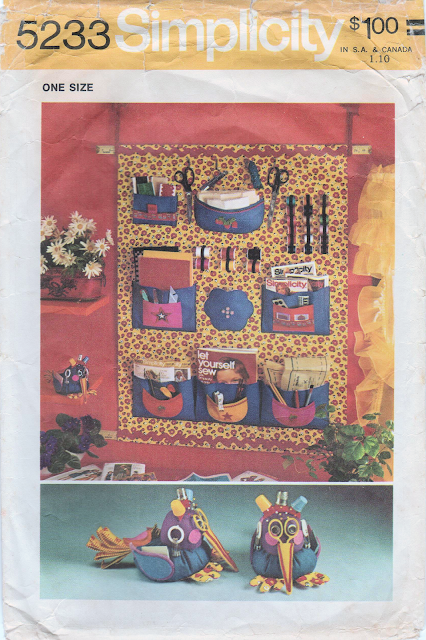 This 1972 collection of sewing accessories features a sewing room organizer, wall-hanging style, with pockets for notions, and tools, and elastic holders for thread. The charming bird pincushion is "Sewphie" the sewing bird, with its beak as a scissors holder, its comb as a place for thimbles, and its tail as a holder for a tape measure. The wings hold tailor's chalk, and rings on the sides of the head hold safety pins. The head and body are stuffed, with the head as the primary pin cushion.

Clever and useful! They would make great gifts, too, don't you think?
Posted by Kathleen at 2:47 PM 2 comments: