While the rest of the United States is positively roasting with temperatures in triple digits, we here on the western fringe of the continent are having a very cool, damp summer. Today I am wearing a sweater. :p

I have noticed on the weather maps for the past week or two that even the interior of Alaska has warmer weather than Seattle. It was with a sigh of envy and irony that I shipped off the following pattern for sleeveless pullover knit tops (Simplicity 9035) to a customer in Alaska today. It's cute, timeless, fun-in-the-sun fashion from the 1970s! 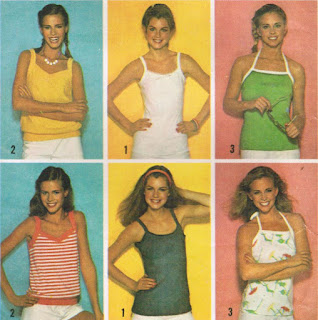 I hope you all are keeping comfortable in style, no matter the weather!
Posted by Kathleen at 11:09 AM No comments: 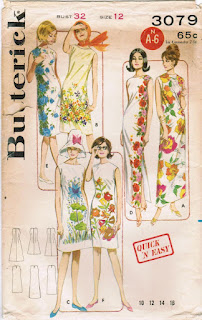 The Result: This pattern for summer shift dresses caters to border print fabrics, displaying them to great effect. Inspired by this, Elisabeth turned this sewing project into a re-purposing project as well by using a vintage sheet as her fabric. The resulting delightful dress captures the colors of the 60s perfectly and also creates a charming summer dress with sunny, casual style! 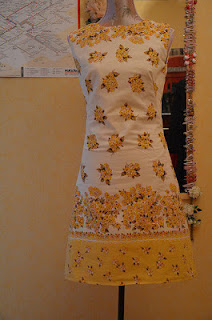 Elisabeth's comments:
"For this dress I used a vintage pattern from the 60s. The fabric is an old bedsheet I got at ebay. The sewing was easy except the zipper. I somehow had a little trouble with it. Overall I really like this dress. I wore it already two times and think this could be a great everyday dress."

You can follow Elisabeth's sewing adventures on her blog: Sewing Fairytales.
Posted by Kathleen at 12:43 PM No comments:

Email ThisBlogThis!Share to TwitterShare to FacebookShare to Pinterest
Labels: 1960s, Before and After

Scraps from the Past - 1940s Dress in Cool Summer Seersucker


If you had this fine dress pattern, what fabric would you choose to sew it in? Can you imagine the dress in a sunny, blue and white seersucker? :D 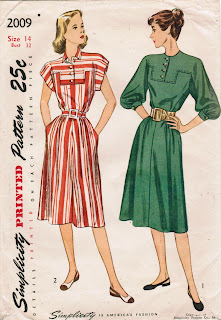 This scrap of seersucker, cut and sewn into a strip of self-fabric bias binding, was tucked into this pattern from 1947, Simplicity 2009. So imagine view 2, for example, only with pinstripes of cornflower blue and white. It's a lovely picture, isn't it?

A perfect dress and fabric for summer!

Email ThisBlogThis!Share to TwitterShare to FacebookShare to Pinterest
Labels: 1940s, Scraps from the Past 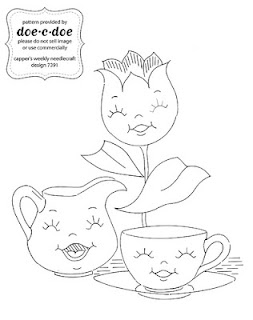 While away your quiet summer hours with a relaxing and fun vintage embroidery project! You’re invited to participate in a summer stitching contest with three categories:
Lots of vintage stitchy fun, lots of prizes (including one from yours truly)! There will be a total of 3 category winners and all 3 will receive prizes from the awesome and generous prize sponsors. And there will be door prizes too, so everyone who participates has a chance to win something terrific!

The contest runs from June 20 to July 20. You can get all the details from Beth of Bookworm Bethie.

The contest is sponsored by the wonderful Flickr group, New Embroidery with Vintage Patterns.

Posted by Kathleen at 8:44 AM No comments:

Here is a clipping of the style a seamstress in the late 1960s was looking for - front wrap style with A-line flare. I love the details! 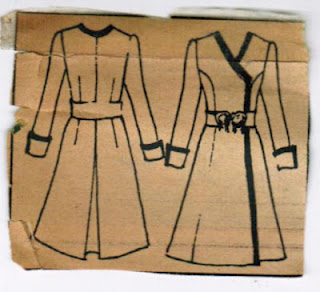 The clipping was taped to this pattern, the one she felt came closest to the design: 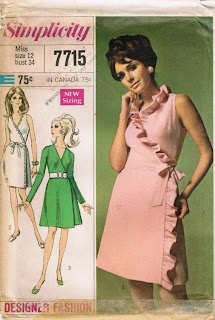 This super-cute A-line mini dress is a wrap-around with front closing. While I find view 1 the cutest, I think she was probably going for the long-sleeved version in view 3. Any way you look at it, it is fab Mod style!

Posted by Kathleen at 2:01 PM No comments:

Do you find the differences in vintage pattern sizes just a tad confusing? I decided that de-mystifying the changes to pattern sizes over the decades would make a great project. So beginning with this post, you will see the results of my explorations. I'll start with the 1920s and 1930s, and then move forward in time in future posts. Let the journey begin! 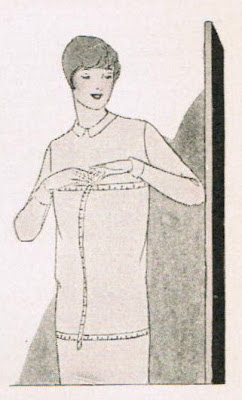 In the 1920s and 1930s, pattern sizes and body types were defined simply by sex and age:  infants, children, boys, girls, men, juniors, misses (or ladies), and women.

Misses sizes in "years"
One of the first things I noticed and found interesting in pattern sizes for misses or ladies from the 20s and 30s were that sizes were often referred to simply as "years". This was a natural extension of sizes for children based on the average size by age. The upper limit of girls' sizes was 14 years (breast 32), while sizes for misses or ladies commonly began at 12 years (bust 30). Eventually the word "years" was dropped, and that is how we have come to use the numbers we use for sizing today (size 10, 12, 14, and so on).  The use of odd numbers started in the 1920s and at first were not necessarily associated with junior sizes. 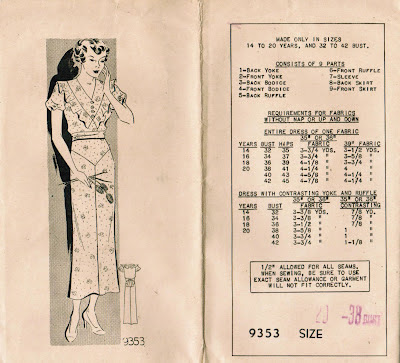 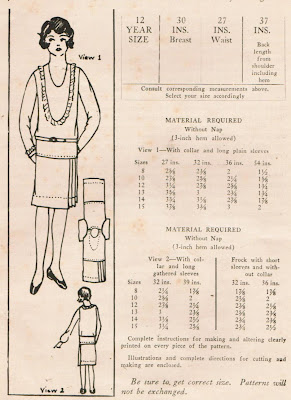 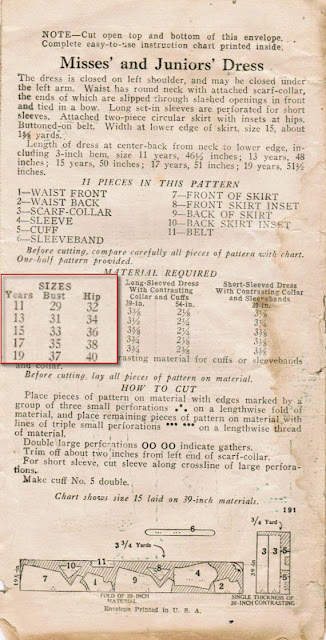 Women's sizes simply go for "bust"
Sizes for women with a "mature" or "matronly" figure were simply sized by bust measurements and ranged from bust 34 up to to bust 48. This method has persisted through the decades, although in the 1920s and 1930s the bust measurement IS the size. 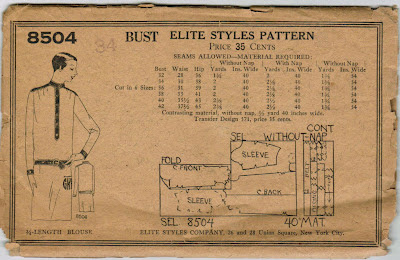 What, no waist?
While 1920s fashions had little to no definition at the waist for ladies' clothing, 1930s fashions brought the waistline back. Nonetheless, for both decades, unless they were for skirts, patterns commonly (though not always) list just the bust and hips, omitting the waist size. Now why would they do that?

One aspect was that the selection of a dress pattern was based on the size of the bust or the hips, whichever was more appropriate for fit. Another aspect was that women were skilled in sewing and simply expected to alter the pattern to fit, which made listing the waistline rather moot. Sewing books of the era provide extensive guidelines on how to alter patterns to ensure a perfect fit, covering every conceivable type of fitting problem.  Butterick patterns in the 1920s and 1930s even had the special feature of "Let-Out Seams", an extra seam allowance at the hips to ease alterations. 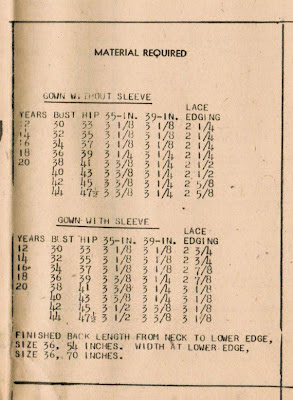 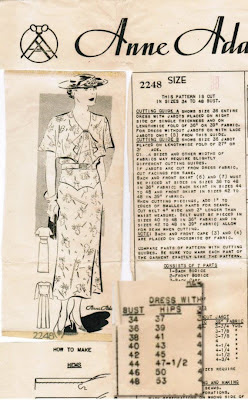 Proportions
As a general rule, when a new design was created by a pattern manufacturer, it was first created for size 16. Other sizes were then graded up and down through the range of measurements from the master pattern. Measurements were fairly (though not always) consistent through the 1920s and 1930s. For example, most frequently size 16 meant Bust 34 inches, Waist 28 inches, Hips 37 inches. Watch this bust-to-waist-to-hips ratio, as it will change over time. In general, a larger waist and larger hips were defined for a given bust size in the 20s and 30s, than was defined in later decades.

In the end, it's all about fit

The importance of being measured before you buy a pattern was a maxim for the seamstress, then as now. "New corsets or a change of diet may have altered your bust, waist, or hip measure."  a sewing book from 1927 states in its comments on taking body measurements. That same sewing book states, "Put on your best corsets and a dress that fits nicely" before taking your measurements. Another sewing book from the early 1930s states that to measure your waistline, "tie a tape around the figure at a becoming waist line". :)

Whether you are sewing vintage patterns from the 1920s, 1930s, or later, always measure yourself (corset not required ;)) and always carefully compare those measurements with the stated measurements on the pattern. And then use your preferred method to determine any adjustments in length or proportion that are necessary. Careful attention to size and fit will ensure that your fashions from the 1920s and 1930s are, indeed, fabulous!

I hope you have enjoyed this exploration of vintage pattern sizing in the 1920s and 1930s, and found it informative. Be watching for my next installment in this series, the pattern sizing of the 1940s!