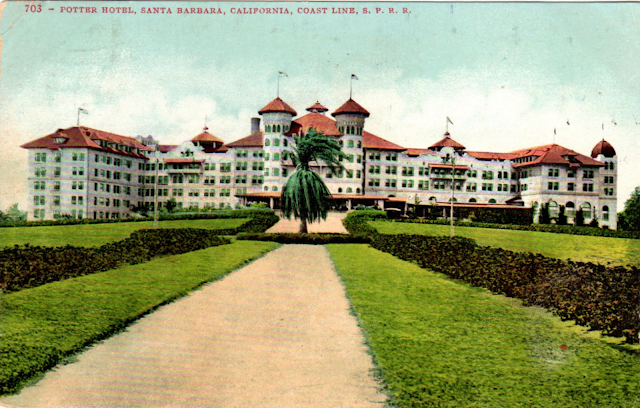 This amazing resort hotel no longer exists, alas. It was still rather new at the time of Mr. Maguire's visit to Santa Barbara, having been built in 1903. It was a veritable phenomenon, in size, luxury, and accommodations, and many families stayed a month or more. Along the front were sun, shaded and glassed-in porches. Above, roof gardens provided spectacular views of the ocean, islands, mountains and the city. The grounds were elaborately landscaped and included tennis courts, a zoo, a palm and fernery building, cactus gardens and enchanting pathways. The gardens were constantly renewed to astonish the winter guests with a showy variety of blooms.

The Potter had its own post office, water system, power plant and a railroad siding that led onto the grounds to allow the bulk shipment of fuel and groceries. Directly behind the Potter the Southern Pacific Railroad built their new station with a pathway leading directly to the Potter. Alas, the hotel burned down in 1921. 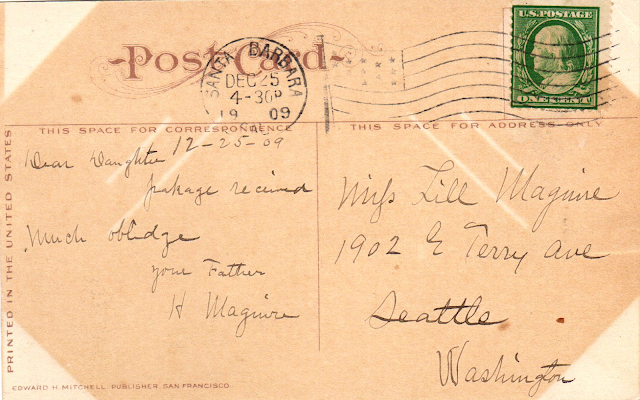 Written and posted on December 25th, 1909, this postcard from Henry Maguire conveys his thanks to his daughter for a Christmas gift received. Very sweet in its brevity, it shows family reaching out to family at this special time of year.

Season's greetings and best wishes to all my readers!
Posted by Kathleen at 7:56 AM 1 comment:

1930s Ball Gowns Put the Accent on the Shoulders

These formal gowns from December 1936 feature extra-wide skirts, narrow waists and eye-catching sleeves. Such a thrilling and elegant movie-star quality! Enjoy this eye candy as a way to de-stress from any holiday madness you may be experiencing. 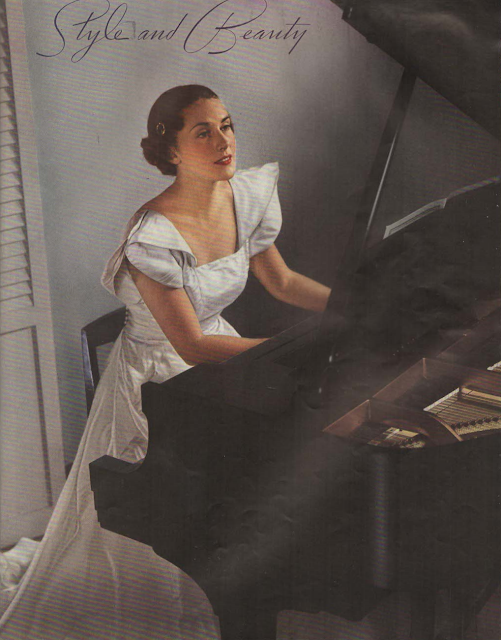 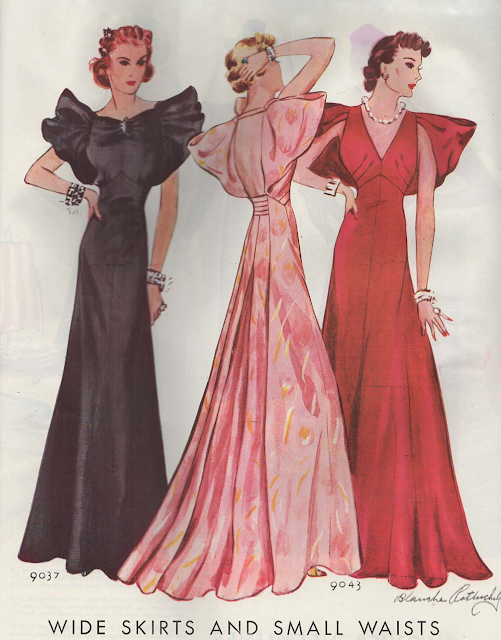 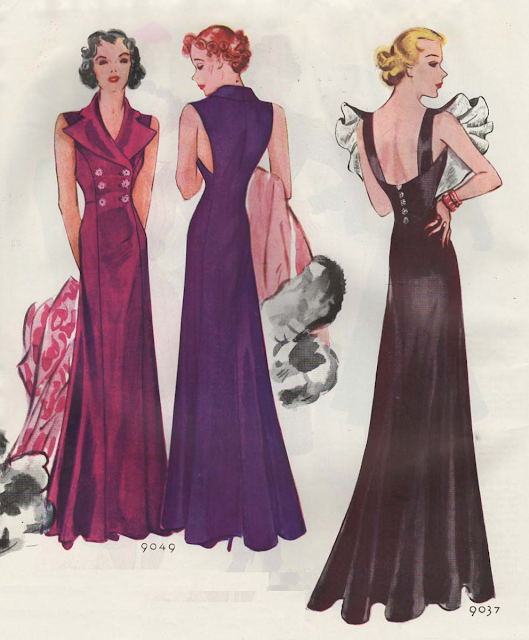 You could float through the evening in this dreamy strapless ball gown from 1965. It has a full circle skirt of chiffon, drifting from a tiny high bodice of satin . 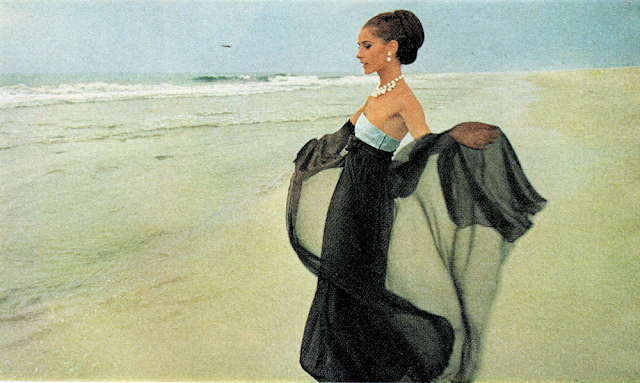 You would make an unforgettable entrance at any holiday soiree!
Posted by Kathleen at 2:49 PM 1 comment:

Scraps from the Past: A Party-Pretty Dress in a Floral Print

The pattern: McCall's 5852 is a sunny, pretty dress from 1961 that is proportioned for your height. 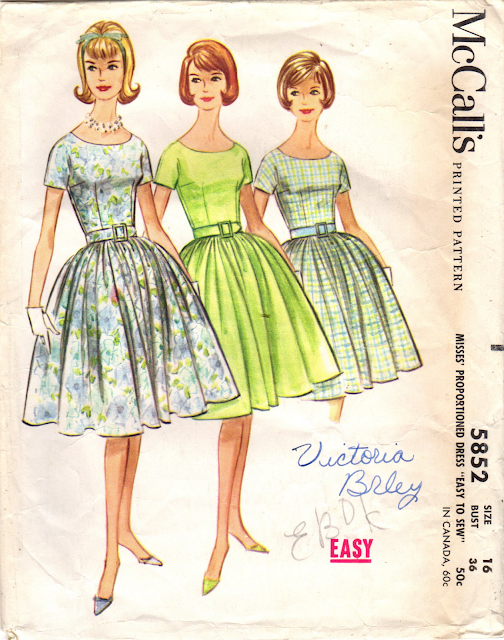 The scrap: Tucked inside the envelope was this narrow strip of floral print cotton. I love how the colors are still bright. Can you visualize the dress in this fabric?

These three ladies are wearing such smartly styled frocks, and they know it! On the left, No. 9039 features a fan yoke, one-in-piece with the petite shawl collar, and all in satin. The middle dress, No. 9027, features a V-neckline with a white vestee adding a pop of brightness. The marvelous frock on the right, No.9048, features a square draped neckline. Such yummy fashion! 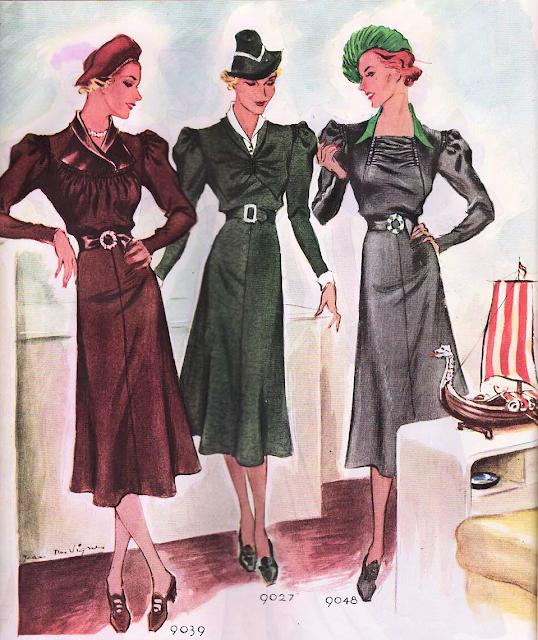