"Home of Future to Be an El[ectric One]"

For your entertainment, I would like to share a clipping I discovered recently, tucked in one of my vintage sewing patterns. From time to time, a vintage pattern includes a hand-worked pattern piece, cut from a newspaper. Most often the pattern piece is cut from the want ads or the sports pages. But every now and then, one is cut from other sections of the newspaper, and in this one, from a November 13, 1960 edition of the St. Louis Globe Democrat, there is a great article on the "home of the future"!

As you can see, the article was trimmed during the process of making the pattern piece, so we are missing some of the details. But there is still quite a bit of the article, so that we can peer into their vision of the home of the future. 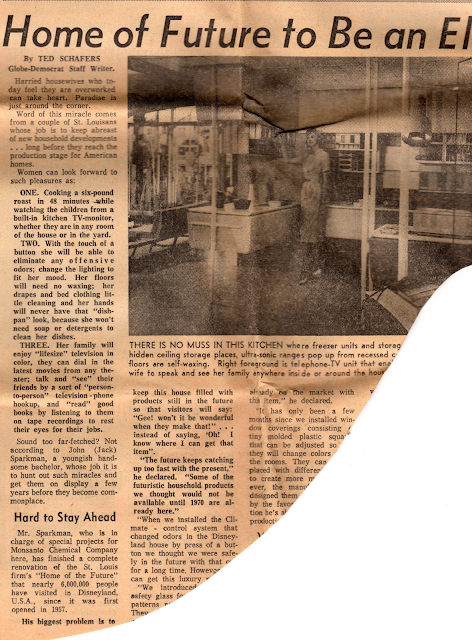 The article states:
"Harried housewives who today feel they are overworked can take heart. Paradise is just around the corner.

Word of this miracle comes from a couple of St. Louisans whose job is to keep abreast of new household developments ... long before they reach the production stage for American homes.

Women can look forward to such pleasures as:
Sound too far-fetched? Not according to John (Jack) Sparkman, a youngish handsome bachelor, whose job it is to hunt out such miracles and get them on display a few years before they become commonplace."

So how many modern conveniences did you spot? Here is a bit larger version of the "no-muss kitchen" of the future, as envisioned in 1960! 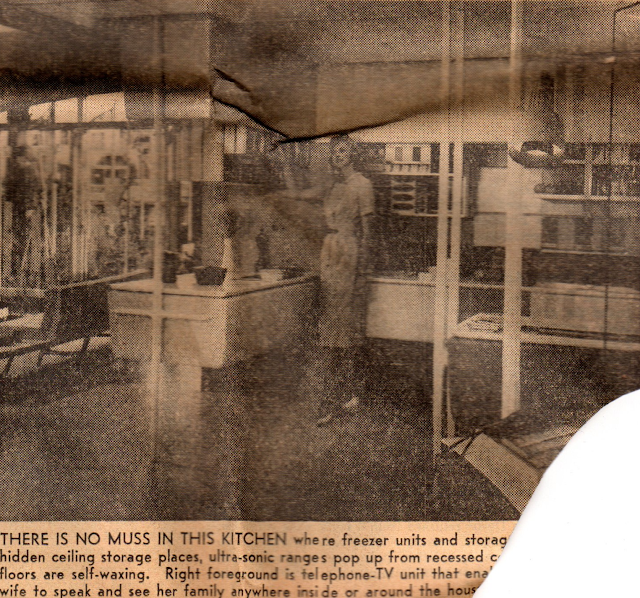 The picture is pretty grainy, but the caption highlights the following kitchen features:
The article goes on to quote Mr. Sparkman: "The future keeps catching up too fast with the present," he declared. "Some of the futuristic household products we thought would not be available until 1970 are already here."

Do you feel that you are in paradise? Enjoy this glimpse of the future!
Posted by Kathleen at 9:01 AM